It’s taken a while to post, but here it is finally. A little synopsis of our trip to Alaska (As posted at the Down Under Divas):

May I just say it was the trip of a lifetime? An incredible experience that I will treasure forever.

Before I left I said if I saw whales, bald eagles and bears, I’d be happy.

Well, I can tell you, not only am I happy, I am thrilled. And delighted and enthralled and stoked and euphoric. I saw them all. And so much more.

Let’s do this through a series of pics:

1) Bald eagles. Cool images, huh? And very close up. They were taken in Mt Mckinley, our first intro to the eagles. Two were brought to the lodge where we stayed, one an immature eagle that had been injured, rehabilitated – and set free before our eyes. And the other an adult who’d been rescued but could not fly and therefore could not be released. Her carer gave an incredibly detailed talk about bald eagles, teaching me a ton of stuff. 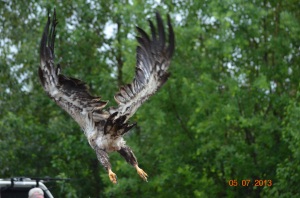 These weren’t the only eagles we saw. We saw hundreds in the wild. Honestly. HUNDREDS. Although lots of them live in Alaska year round, others had come to feast on the millions of salmon that had begun their run upstream to spawn.

(BTW – Even though Mt Mckinley is the biggest mountain in North America, we didn’t get to see a speck of it. It was covered in cloud! I’m still not convinced it even exists. I suspect it’s just an old Athabaskan legend…) 😉

Then there were the whales. I swear I would have been content seeing a humpback or two. (Which we did see. Some while standing on the deck of the cruise ship, looking over the side. And another on a whale watching tour. How cool is the fluke below? Hubby got a series of action shots of the tail coming out the water, sticking up and then disappearing under.)

But it was the pod of killer whales that swam past us that almost stopped my heart beating. That was something I had dreamed of seeing but never imagined I would. I was so awestruck I might have cried a little when I saw that 6-foot fin in the water for the first time.

Then there was the bear. Okay, you need to understand, we’ve never seen bears in the wild. There are no bears in Australia – or South Africa for that matter. And every day trip we did, we were told – “Look out for bears, you never know when you might see one.” By day ten of our eleven day trip through Alaska we hadn’t seen any. NONE!  Then in Ketchikan we did a zip-lining adventure in the 2cnd biggest temperate rain forest in the world. It was stunning. And loads of fun. (Yep, that’s Mr 12 on one of the zip-lines.) As we stood on one of the platforms high in the trees, I was moaning to Mr Dee that we’d never see a bear, and all the warnings were just false advertising… when movement caught my eye. And there it was. A black bear right beneath us. A heartstoppingly exciting moment for sure. (The poor kids are totally peeved. They had already zip-lined through to the next platform a good 200 meters away, and missed it.)

And then there were the glaciers.
Can I just say…”WOW”! Exquisitely beautiful. And blue. How on earth did I not know glaciers were blue??? 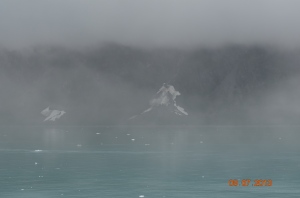 This pic above is taken on our approach to the Hubbard Glacier. It was frigidly cold – in the middle of summer – and icebergs surrounded the ship for mile upon mile.

This image above is of Marjorie Glacier, in Glacier Bay – possibly one of the most beautiful places on earth. 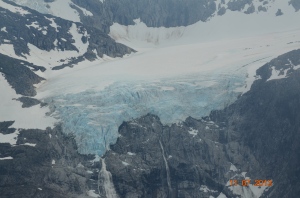 And this piccie above was taken as we flew over the Mendenhall Glacier in Juneau.

The two photos below were taken while riding the train from Denali down to Whittier, where we boarded the ship. The train ride took 9 hours, and was so unbelievably beautiful I never wanted it to end:

I could bore you for hours more with details about the trip… (Hubby took over 700 photographs) but I won’t subject you to that.

Suffice it to say I had the time of my life!

6 thoughts on “The trip to Alaska”

Speed: See You In My Dreams

Speed: Rhythm Of My Heart

Finally Ever After: The One That Got Away

Two To Tango: A Touch Of Confidence

Three Of A Kind: Going All In

Three Of A Kind: Raising The Stakes

Three of a Kind (Print)

Three Of A Kind: Full House

A Question of Trust

A Question Of Love

Circle of Friends: Only Tyler